Home » Surprise Marriage Proposal in a Packed London Cinema: Dorcas and Cyril Are Engaged!
Table of Contents show
1 Meet the Newly-Engaged Couple and Hear How It All Happened
2 Story of How They Met
3 On How Cyril Proposed to Dorcas
3.1 Their Proposal Video (below)
4 After the Proposal…
5 Favorite Moment of the Day
6 How Did You Know s/he Was “the one”?
7 About the Engagement Ring
8 What Made It All Unforgettable
9 Wedding Bells! Wedding Bells!
10 A Big Hearty Congratulations from Us

He told her they were going to watch a movie but she did not know it was a lure to seal their relationship with a proposal and a ring. While watching the movie in the packed cinema, she suddenly saw pictures of her and both of them (on the movie screen). She wondered what was going on. Next came the sound of his voice from the cinema speakers; he was professing love to her. Before she knew anything, he was down on his knees, with a ring in hand. Scroll or swipe down to read the sweet details of how Cyril proposed to Dorcas in a packed London cinema.  Also, get to see her engagement ring selfie with other photos of that day, and find out how he executed the surprise proposal plan.

What could be more romantic to a young woman than a marriage proposal from the man of her dreams, with a gorgeous engagement ring? It’s every girl’s dream! It’s her guy’s public declaration of love. Here on the NaijaGlamWedding community, we’re never tired of marriage proposal stories, and in this edition, the featured newly engaged couple excitedly shared with us the details of how it all went, down to the magic moment where she said ‘YES’. You’ll also get to read their ‘how we met’ story. Scroll down to read it all, see their beautiful pictures and watch their romantic marriage proposal video.

Meet the Newly-Engaged Couple and Hear How It All Happened

Story of How They Met

From Her: We met on the road between our houses, on my way to church. I was walking with my sister and he stopped us to ask if we were on our way to service. We said yes and he asked “where?” explaining that he recently moved into the area and needed a place to worship. 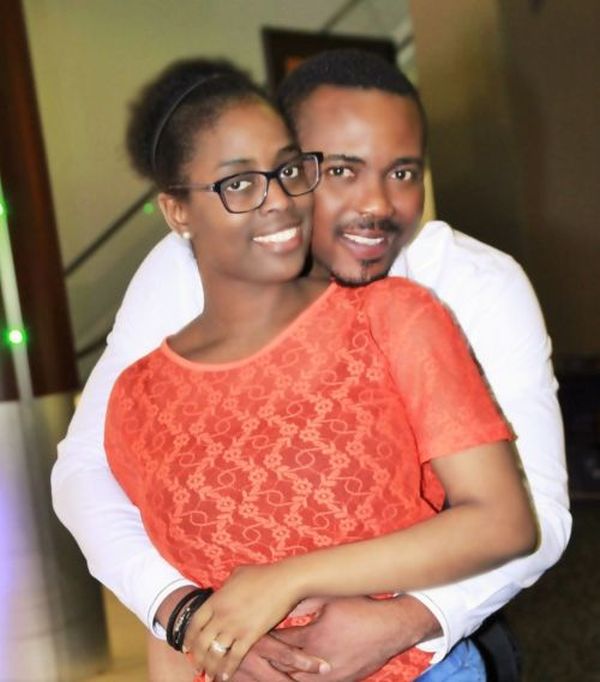 Dorcas continues: So, we gave him directions and surprisingly he showed up at service that same day. That day, we spoke briefly in church and I moved on with my life. To be honest, I forgot about him. Over the next couple of months, my sister would say to me: “remember that guy we invited to church? he said I should say hello” and I would reply “ok, I’m glad he’s still coming”, not really sure who she meant. After two months, I guess he finally plucked up to courage to come and say ‘hi’ himself. We spoke at the end of service and went out on our first date the next Sunday.

On How Cyril Proposed to Dorcas 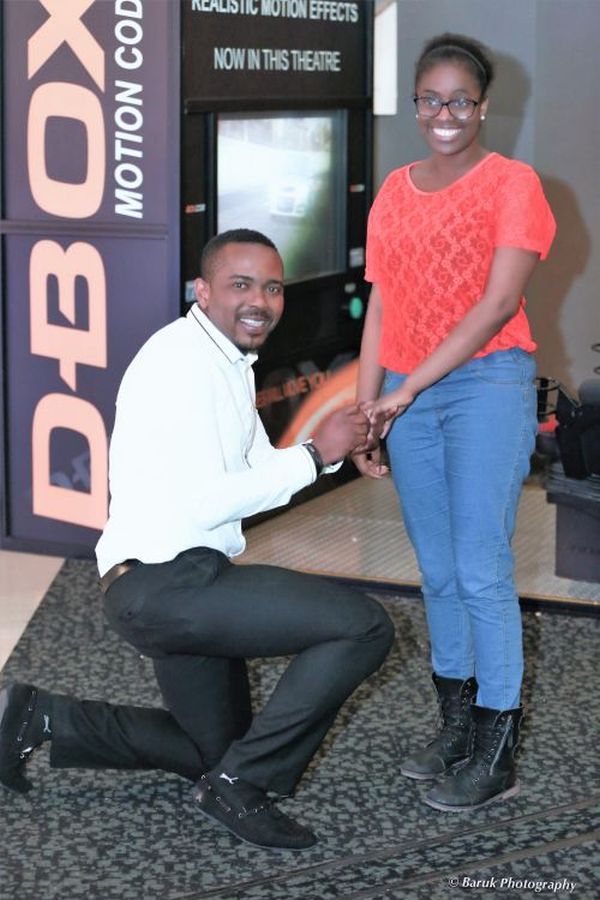 Her Story:  It was just a normal Sunday. While at church, my sister asked if I wanted to go Cinema with her and a friend because they had a free ticket. I said ‘yes’ and asked if Cyril can come. My sister said ‘no’ and I didn’t think much of it because she had been complaining that I no longer spend time with her. We arrived late at the cinema to watch ‘Batman V Superman’. After about 10 minutes, I fell asleep and didn’t wake up until the end of the movie. My sister and our friend started talking and wanted to watch to the end of the credits so I just sat there silent and simply wanted to go home and sleep.

When the credits ended, a picture of my face came up on the cinema screen and I was just staring at it, not realizing that it was my face.  Then, my sister ‘stood up and I thought ‘finally we’d be going home’.  I turned around to get my jacket and I heard Cyril’s voice through the speakers, saying “Hello Dorcas”.  I immediately turned around to realize that a video of pictures of us (Cyril and I) had been running on the cinema screen. While the pictures were playing, Cyril’s speech and profession of love to me was also loud and heard by everyone in the cinema.  So, I screamed ‘Oh my God’ and burst out laughing. I don’t know why I did that.  When the video stopped playing, Cyril appeared beside me, said ‘his speech’, got down on both knees and asked me to marry him. Of course, I said YES!!!

I laughed in the cinema when he was proposing but It wasn’t until we got in the car  and started driving back home that everything sunk in and I cried (a happy cry).  I thought about the surprise proposal and it made me laugh out loud.

Their Proposal Video (below)

His Story: I proposed to Dorcas at the Cineworld cinema at the O2 arena in London where I arranged with the events cinema manager to allow me play a video after the ‘Batman vs Superman’ movie on the 8pm show, on March 27 2016. I had made a video slideshow video ‘with pictures of Dorcas alone and some with both of us.  The video soundtrack was from one of my own songs that she knows, as well as a voice-over of me expressing my affection to her. The video ended with me asking the ultimate question “will you marry me, Dorcas?”.

Right after I said “YES”, I turned around and saw that all our family and friends were there. He had planned everything perfectly, and I got to share it with all the people that mattered to us. By this time, it was after midnight, so we just took some pictures and went home.  -Dorcas

Favorite Moment of the Day

From Dorcas: There were so many things… the surprise… I’m (naturally) very nosy, and always figure it out when people want to surprise me. He pulled it very good because I did not guess it at all. The fact that the people I loved were there, it meant a lot to me. The big grand gesture… the whole night was so unexpected and perfectly amazing.

From Cyril: My best part of the day was her reaction to the video and the excitement that took over the cinema hall. She was screaming, thinking she was alone with her sister and a family friend. But unknown to her, 20 of our friends graced the occasion, including her mum. Everyone was very excited. 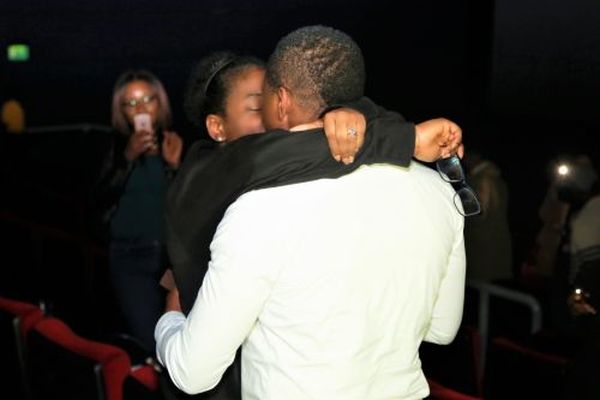 From Dorcas: I asked God for him (Cyril). I knew what I wanted in a husband and as silly as this sounds, I wrote my list and took it to God. A few months later he showed up with everything on my list and more. We have the same ideas about family, life and God. Our core and moral values are the same. I trust him with my life and my future. And (I love that) we argue. I can’t marry a man I can’t argue with because someone in that relationship is faking. I’m sorry to say, but no two people can agree on everything. We have our disagreements and we work through them. He’s not afraid to say sorry and he truly loves me. I can go on and on and on. The truth is, I know because I’m at peace with him (Cyril) and when I think of my future with him, I grin like an idiot.

From Cyril: I knew she was the one just because of the peace I feel around her. My mind and Spirit are at rest. One day, I asked myself a question “If tomorrow I were a pastor or businessman, a politician, a sportsman, a carpenter, will she fit in as my wife, and my answer was ‘yes’. She is a woman for all seasons. And I hope to give her the very best life has to offer.

About the Engagement Ring

The ring is an aquamarine gemstone set with diamonds. -Dorcas

What Made It All Unforgettable

Dorcas says: One thing that was very special to me was that he consulted with my family first. I have a very close family and we have been through a lot together. So, it meant so much that he received their blessing, including my sisters’ blessings. That single gesture really made the whole marriage proposal perfect. I also liked that photographers, a videographer and Cyril’s friends were all there to capture the whole thing, so that I can relive it again and again, as many times as I want.

A Big Hearty Congratulations from Us

Congratulations to the newly engaged couple, from us here at NaijaGlamWedding. We wish them a fun-filled time during their wedding planning! We look forward to featuring your pre-wedding engagement shoots and photos and stories from your wedding.

WANT TO SUBMIT YOUR PROPOSAL OR WEDDING STORY? Very simple – just email us (click here) OR Faceboook us or follow us and tag us on instagram @naijaglamwedding or #naijaglamwedding

YOUR TURN: If you enjoyed reading this marriage proposal story, be sure to leave a congratulatory message to the couple, or simply comment down below. I’ll also appreciate if you share this post with your friends – instagram the pics to them, facebook them, email…